Trần Vĩnh Tuyến, vice chairman of the city’s People’s Committee, said: “The city will give top priorities to projects that apply science and technology, especially the use of artificial intelligence (AI) in solving the city’s problems and for smart urban development.”

Speaking at Saigon Hi-tech Park’s annual conference last Friday, Tuyến said the city would work with agencies to build a roadmap for the application of blockchain in the country.

In addition, the Ministry of Science and Technology will give priority to blockchain start-ups through a new project called “Support a National Innovative Start-up Ecosystem by 2025,” he said.

Võ Thị Trung Trinh, deputy director of the city’s Department of Information and Communications, said that blockchain could be used in public services and urban management.

To build a smart city, the city needs technology-based solutions to build a digital government, she added.

Lê Bích Loan, acting head of the Saigon Hi-Tech Park’s board of management, said that blockchain technology appeared around 2008 after the global financial crisis of the Lehman Brothers’ investment bank in the US.

“The invention of blockchain has made financial transaction systems more efficient, transparent and simpler since online payments can be sent directly from one party to another without going through any intermediary organisations such as financial institutions, commercial banks or central banks.”

Blockchain initially was developed as open-source software to secure a decentralised financial transaction process for cryptocurrency like bitcoin, which differs from the traditional centralised process controlled by central banking systems, she said.

After a decade of development, blockchain can now be used to build a secure communication platform for smart cities, providing better public services and optimal utilisation of available resources, including e-government, urban transportation, and infrastructure needs.

During the event, the management board of the High-tech Park and HD KING Technology World Co. Ltd. signed a Memorandum of Understanding (MoU) to promote blockchain technology and AI to support the development of HCM City’s smart-city plans.

In addition, the incubator centre signed an MoU with South Korea’s CBA Ventures that will focus on technology transfer and human resource training in blockchain technology.

According to the Asia Blockchain Review, Việt Nam has become an emerging leader in the field of blockchain technology. More than 2,000 people attended the Việt Nam Blockchain Week Conference last year, indicating that a strong blockchain community is growing well in the country.

Việt Nam is among the world’s top 20 countries in terms of the number of internet users, social media users and smartphone users.

In addition, the young population, fast internet development, and increased number of e-payments are other factors that make Việt Nam favourable for blockchain technology.

However, challenges exist, including changing the resistance of companies and consumers to use newer technologies. The country also lacks a specific legal framework to supervise new tech-based business models such as lending, fintech and digital asset management.

A shortage of quality staff to develop products and services in artificial intelligence (AI), blockchain and big data exists in the country.

The Ministry of Science and Technology will give priority to blockchain start-ups through a new project called “Support a National Innovative Start-up Ecosystem by 2025,” according to Tuyến, vice chairman of the city People’s Committee.

To build a sustainable blockchain ecosystem, all major players including incubators, accelerators, and community building should be involved, experts said.

Việt Nam could emerge as one of the next blockchain hubs in Southeast Asia and across the globe, which would help attract foreign investment thanks to huge cryptocurrency transactions and a labour force with strong caliber, according to Forbes magazine.

Blockchain technology is a shared record of transactions that anyone can see or read. A locking method is employed to prevent any tampering by one party, which helps to make blockchain secure, according to experts.

The conference was attended by hundreds of local and international researchers, entrepreneurs, start-up representatives and managers in the field of blockchain. — VNS 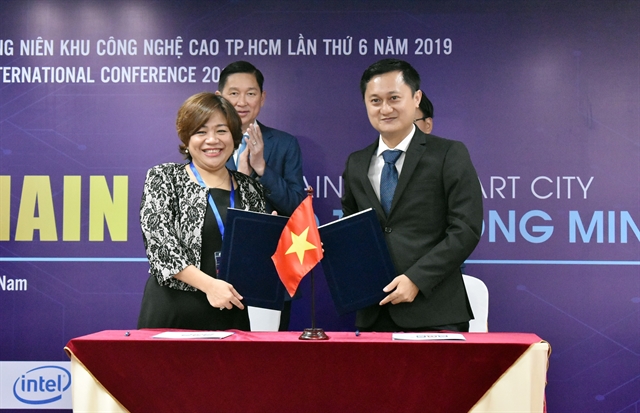 Lê Bích Loan, acting head of the Saigon Hi-Tech Park’s board of management (left), at the signing of an MoU between the incubator centre and South Korea’s CBA Ventures last Friday in HCM City. — VNS Photo Bồ Xuân Hiệp